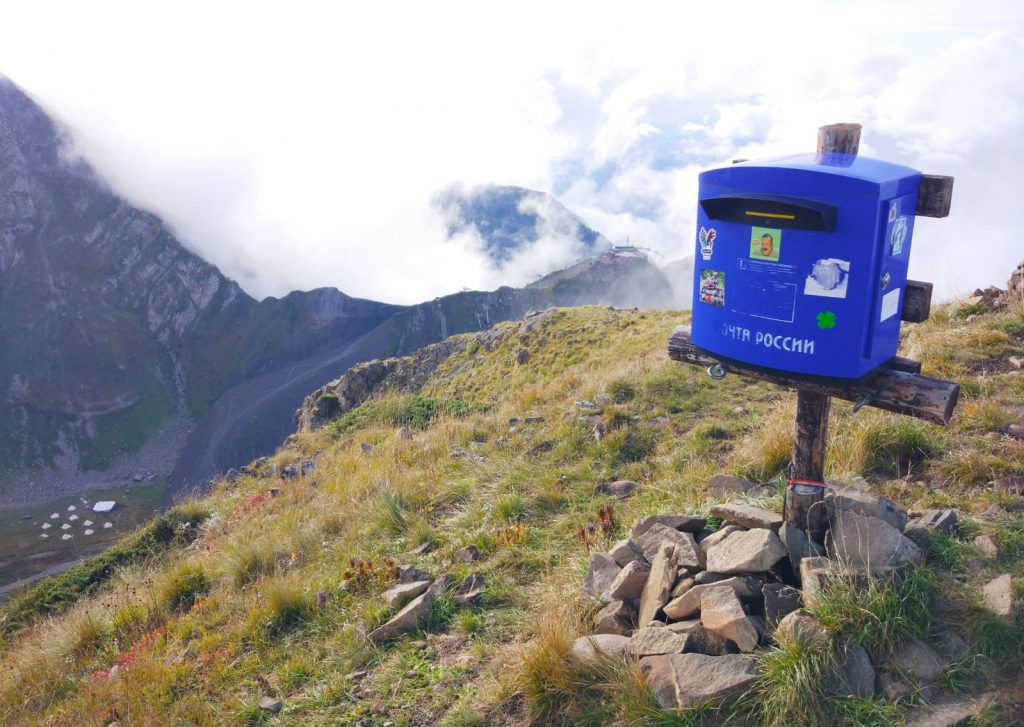 As a postcrosser – and in general – I’m lucky to live in a city that it beautiful, touristy, hosted a wide variety of World class sporting events, interconnected with a UNESCO WHS, and borders a “rare” country. There were also many postage stamps issued dedicated to our city, events that took place here, our flora and fauna, which is also nice. All this is a great basis for postcard exchanges!

Last year I discovered yet another interesting and cool way to postcross: a postbox at the top of Black Pyramid mountain in our city! And a year later I decided to try it out. 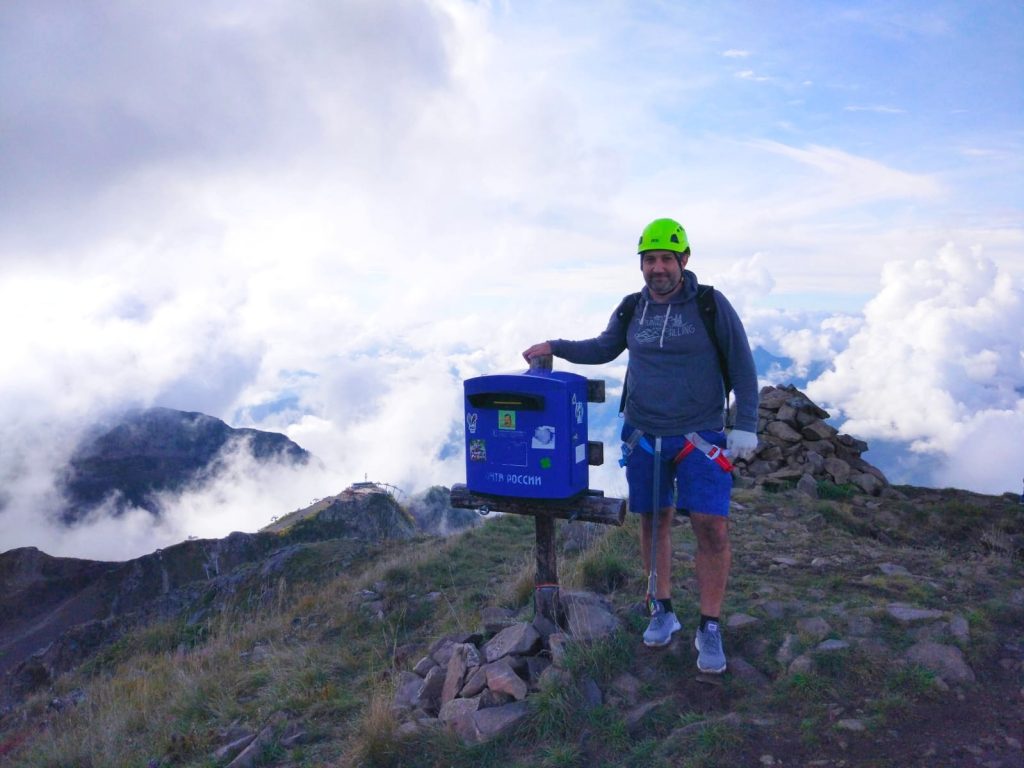 Sochi, which is squeezed between the Caucasus mountains and the Black Sea, has several great skiing resorts. One of them – “Krasnaya Polayana” (formerly known as “Gorki Gorod”) – has a postbox at the top of the mountain the resort is based around. It sits right at the top of it! You need to hike and climb to it from the highest lift station. Not far, but still, its probably not for everyone. At first, it felt like a tourist trap: its pricey to get there, and why else would it be up there?! But then… there’s very little info about it online (and none on the official site), resort’s staff knows about it, but, as it turns out, doesn’t even know where exactly it is located, and there are no postcards or stamps sold anywhere near it. So, it’s a bit of a mystery of why it’s there exactly, and who picks up the mail from it. But the staff assured me it’s being serviced, so let’s do it.

I live in Adler – a seaside part of the city. The trip starts with a picturesque drive up to Krasnaya Polyana town area, where all our skiing resorts are located. While grabbing some food I looked at the thick clouds covering the mountain, contemplating if going up actually makes much sense that day. When buying lift tickets I asked about the postbox, where it is, and if it is hard to get to. The answer: not hard, it’s up there, on our territory, just ask the staff when you get to the last lift station. Something similar I heard from the customer support rep when I called in advance.

The lifts start at 540 meters above sea level. The gondola lifts take you up to 960m, then to 1460m, then to 2200m. From here you have to take two short (but really slow) chair lift rides. The line to the first one was so long, I decided to follow the staff’s suggestion and take a walk to the next one, because it was actually downhill. The line to the final lift was short, the ride was steep, and after a little while I was at the highest lift station on the Black Pyramid mount.

It was windy, it was cold – 10C, compare that to cozy 24C I left in Adler. I looked around, but saw no postbox anywhere near. I asked: oh, it’s at the top of the mountain! you have to hike up there by this trail. The trail looked easy, and had a safety rope set up along it, but I could not see past the nearest turn. It costs additional $7 to go up the top. They dressed me up for a climb, and instructed on use of the safety lines, and rules on passing other people — seemed excessive at that point, but turned out to be needed beyond the closest turn.

The easy trail turned into some mild climbing very quickly. It was fun. It probably took about 15 minutes to get up there. The postbox sits right at the top. The views are fantastic! Clouds just highlighted where I was, and did not spoil anything.

I took a few photos, a selfie for a “proof”, and dropped the postcards into the box. The sound of cards hitting the bottom of it told me it was empty. Who picks mail up? How often? And, again, why is it here in the first place? Mystery. But I hope somebody does pick it up, and all 15 people will receive their cards.

A week has passed since that trip. I haven’t received my card, and it would be overoptimistic to hope to receive it in such a short period of time. But two days ago we had our first snowfall in the mountains. The place I visited reportedly had 17 cm of it. This snow will melt away soon enough, I’m sure, and they’ll have plenty of opportunities to pick up that mail, if they haven’t done it yet. But I’m sure glad I didn’t stretch it out more, and went up there last week 🙂