After learning about sending mail to some of the partially recognized countries, like Abkhazia, Transnistria, and Nagorny Karabakh, I wondered, how do I send mail from Russia to Kosovo ? Russia doesn’t recognize Kosovo’s independence, and supports Serbia in the conflict. So, it may not be as easy as writing “Kosovo” in the address.

Searching the web shed no light on this question, nobody on postcrossing forum knew either. I asked Russian Post rep in Vkontakte (“Russian Facebook”), he came back with “you have to address it to Serbia”. I was skeptical it would make it. So, I decided to test…

I needed to find someone in Kosovo who’s willing to give me his or her postal address, and let me know when they receive my postcard (or that they did not receive it in couple of months).

I found help on Reddit from the owner of The White Tree Hostel in Pristina. I also got some tips on what to write on the card: some people also doubted, that writing Serbia as a destination country would allow the card to arrive, and suggested writing “Kosovo via Albania”, and or “via Switzerland”.

So, I sent three cards, addressed “Kosovo”, “Kosovo via Albania”, and “Kosovo, Serbia”. I dropped them in different post boxes on different days, thinking they get handled by different people, but now I’m thinking it was silly — they would all end up in sorting facility anyway.

Long story short: the last one — addressed to “Kosovo, Serbia” — arrived 🙂 The first two turned up in my mail box with “RETOUR” postmark the next day after I received the message that the card via Serbia arrived. Though, it wasn’t clear where they were returned from. So, I decided to try again…

Since it seemed that sending via Serbia works, and my ultimate goal was to receive a postcard from Kosovo, I decided to send two more cards to Post of Kosovo, kindly asking for a postcard. So I did, addressing to “Kosovo, Serbia”… but they both came back as well, this time with more explanatory reason: 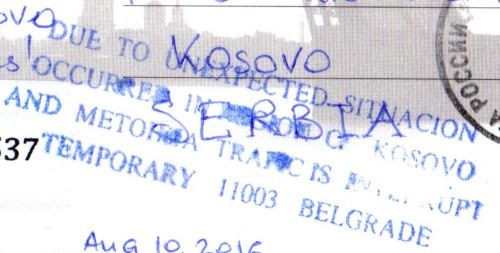 I’m curious if sending mail to Kosovo from other countries is unreliable too. I’m also curious if card addressed to Kosovo would actually make to to Albania, will it be routed to the actual destination in Kosovo. So, here are a couple more tests I’m going to run:

Stay tuned for the results 🙂